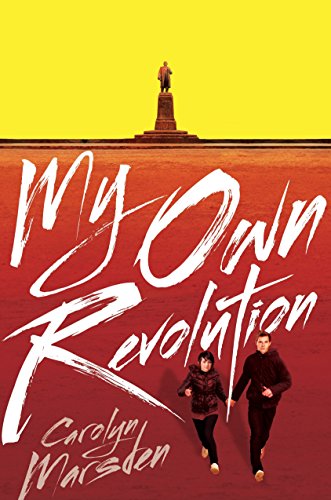 My Own Revolution
Carolyn Marsden

In 1960s Czechoslovakia, Patrik participates in and rebels against the communist regime, knowing that anyone could become an enemy in the blink of an eye.Fourteen-year-old Patrik rebels against the communist regime in small ways whenever he gets the chance: spray-painting slogans, listening to contraband Beatles records, even urinating on a statue of Lenin under cover of night. But anti-Party sentiment is risky, and when party interference cuts a little too close to home, Patrik and his family find themselves faced with a decision — and a grave secret — that will change everything. As the moments tick toward too late, Patrik takes his family’s fate in hand, risking everything for a chance at freedom. Examining the psychological toll of living under an authoritarian regime, Carolyn Marsden allows readers to experience both Patrik’s persistent worry and his hope for better things.>
2 Votes

Imagine living in a country where only one viewpoint is correct. You cannot listen to certain types of music or wear certain styles of clothing. You and your friends feel stifled by the strict government. No, this isn’t a spinoff of The Hunger Games. This is Communist Czechoslovakia, where thirteen-year-old Patrik and his friends long to be normal teenagers of the rockin’ 1960s.  Dancing secretly to a Beatles record that they bought on the black market, they dream of freedom in America.

What's this?
My Own Revolution review by tkh2002

In communist Czechoslovakia, lives a teenage boy named Patrik, who does not agree with the ways of the party. He tries to speak out against them with his best friend Danika, but the members of the party are always spying. Things really start to change for Patrik when Danika begins to agree with the communists and become very close with members of the party, while at the same time, he realizes he might just be in love with her. Will Patrik be able to escape the horror of the communist world he is living in? Or will he be caught by the party and suffer the consequences?