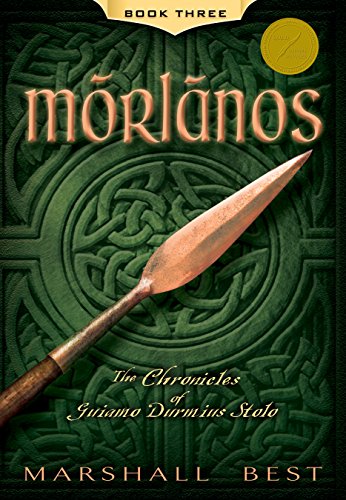 Morlanos(Chronicles of Guiamo Durmius Stolo)Book3
Marshall Best
Having destroyed the Fomori in Britain , Guiamo Durmius Stolo decides in 51 B.C. to bring the Cruthin people, once slaves to the Fomori, to Ireland , but encounters the Fomori who reside there as well. Guiamo discovers that the gods venerated by the Druids are unworthy. The gods are displeased with him and begin to work against him.Combining legitimate legends with actual historical events, Marshall Best weaves an epic story that portrays the ancient world as it might have been, a world which the ancient historians recorded as fact; a time when gods ruled the earth and strange creatures dominated the land. It is the era of civilized conquerors exploring distant and primitive new lands. Scant recordings left to us today only touch on the fringe of the fantastic and brutal reality that existed in those distant lands of the west. Into this age, young Guiamo enters the world stage as the great game-changer, and by his hand the gods and beasts become destined to disappear into myth and legend.
1 Vote

In this story, there is a tribe, divided into three groups, which needs to unite and declare war on their common enemy. They get a new leader who unites them and pushes the enemy out.  There are a lot of battle scenes, and a lot of different characters come into play. The author's purpose seems to be to entertain the reader about an ancient tribal war. There are a lot of displays of leadership and bravery. I would say this book would fit into the action genre.