Mike and a Lynx Named Kitty 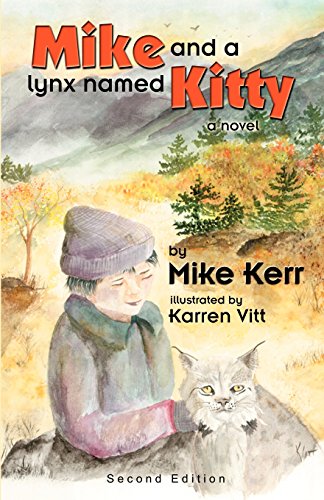 Mike and a Lynx Named Kitty
Karen Vitt, Mike Kerr
Mike Kerr pens a story based on his boyhood experiences in a commercial fishing village in Kodiak, Alaska. On this forested island surrounded by ocean where whales frolic offshore, Mike builds his own campsite to practice outdoor survival skills. He discovers a lynx kitten and cares for it when it becomes orphaned. Torn between his love for the animal and allowing it to remain wild, Mike learns respect for nature balancing it with humanity when he allows the animal to roam free. A long and cherished friendship develops between animal and boy with experiences that build love and trust between them. Mike's story describes many fun and interesting experiences about life in rural Alaska including: wilderness camping living among the wildlife on land and sea respect for the environment outdoor survival skills the challenges of commercial fishing Illustration copyright 2006 Karen Vitt
1 Vote

Tweet
Mike and a Lynx Named Kitty review by PSmit

Mike is a 10-year-old Alaskan boy who discovers a lynx while on a fishing trip with his father. Mike names the lynx Kitty. His father doesn't want to take the little lynx in at first, until they find out that Kitty's mother and sister have been crushed by a fallen tree. Mike is excited to have Kitty and can't wait to have an adventure with him. As it turns out, he doesn't have to wait long! Immediately after returning home with Kitty, the two find themselves saving a girl's life! When Mike and Kitty retire to the woods for a campout, they save three lost kids.