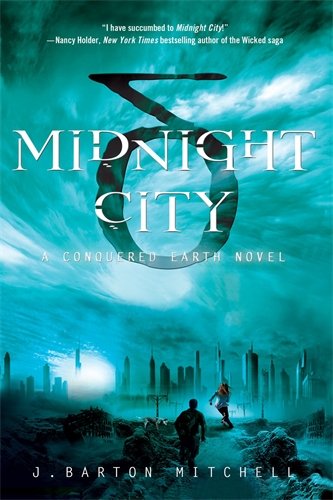 Lord of the Flies meets War of the Worlds in J. Barton Mitchell's alien-invaded post-apocalyptic world where two teens and a young girl with amazing powers must stop the aliens' mysterious planEarth has been conquered by an alien race known as the Assembly. The human adult population is gone, having succumbed to the Tone---a powerful, telepathic super-signal broadcast across the planet that reduces them to a state of complete subservience. But the Tone has one critical flaw. It only affects the population once they reach their early twenties, which means that there is one group left to resist: Children.Holt Hawkins is a bounty hunter, and his current target is Mira Toombs, an infamous treasure seeker with a price on her head. It's not long before Holt bags his prey, but their instant connection isn't something he bargained for. Neither is the Assembly ship that crash-lands near them shortly after. Venturing inside, Holt finds a young girl who remembers nothing except her name: Zoey.As the three make their way to the cavernous metropolis of Midnight City, they encounter young freedom fighters, mutants, otherworldly artifacts, pirates, feuding alien armies, and the amazing powers that Zoey is beginning to exhibit. Powers that suggest she, as impossible as it seems, may just be the key to stopping the Assembly once and for all. Midnight City is the breathtaking first book of the Conquered Earth series.
2 Votes

It's been eight years since the Assembly (an alien race) took over Earth and captured all the adult population. Eight years that Holt Hawkins has spent as a bounty hunter in a world ruled by rebel youths. Holt is transporting his latest prisoner, Mira, to the Midnight City to collect his reward when the two come across a crashed Assembly ship with a young girl named Zoey trapped inside. Together, they rescue Zoey and soon discover her magical abilities that could stop the Assembly for good.