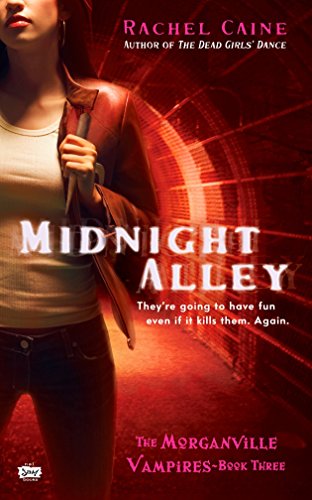 Midnight Alley
Rachel Caine
Claire Danvers's college town may be run by vampires but a truce between the living and the dead made things relatively safe. For a while. Now people are turning up dead, a psycho is stalking her, and an ancient bloodsucker has proposed private mentoring. To what end, Claire will find out. And it's giving night school a whole new meaning.Watch a Windows Media trailer for this book.
1 Vote

Midnight Alley is the third book in the Morganville Vampires series, which follows the lives of sixteen-year- old Claire Danvers and her friends in Morganville, Texas. Morganville isn't just any college town, though; it's run by vampires. Luckily for her, Claire isn't just any sixteen- year-old genius; she's brave and resourceful enough to stay alive in Morganville, which can be tricky. Now, Claire has signed her loyalty (and basically her life) away to Amelie, the most powerful vamp in town. This so-called Protection, however, may not be as reassuring as it sounds.