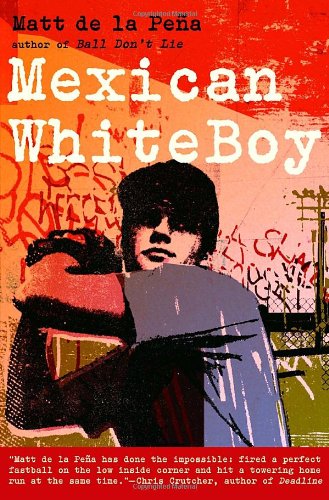 Mexican Whiteboy
Matt De La Peña
Newbery Award-winning author Matt de la Peña's Mexican Whiteboy is a story of friendship, baseball, acceptance, and the struggle to find your identity in a world of definitions.Danny's tall and skinny. Even though he’s not built, his arms are long enough to give his pitch a power so fierce any college scout would sign him on the spot. Ninety-five mile an hour fastball, but the boy’s not even on a team. Every time he gets up on the mound he loses it.   But at his private school, they don’t expect much else from him. Danny’ s brown. Half-Mexican brown. And growing up in San Diego that close to the border means everyone else knows exactly who he is before he even opens his mouth. Before they find out he can’t speak Spanish, and before they realize his mom has blond hair and blue eyes, they’ve got him pegged. But it works the other way too. And Danny’s convinced it’s his whiteness that sent his father back to Mexico.    That’s why he’s spending the summer with his dad’s family. Only, to find himself, he may just have to face the demons he refuses to see--the demons that are right in front of his face. And open up to a friendship he never saw coming."[A] first-rate exploration of self-identity."-School Library Journal"Unique in its gritty realism and honest portrayal of the complexities of life for inner-city teens...De la Peña poignantly conveys the message that, despite obstacles, you must believe in yourself and shape your own future."-The Horn Book Magazine"De la Peña does an excellent job...Readers see themselves in Danny, Uno, and Sofia, whether or not they share their backgrounds. In the end, they find themselves wanting the characters to succeed."-VOYA"The baseball scenes...sizzle like Danny's fastball...Danny's struggle to find his place will speak strongly to all teens, but especially to those of mixed race."-Booklist"De la Peña blends sports and street together in a satisfying search for personal identity."-Kirkus Reviews"Deftly explores the subject of interracial mixing."-Multicultural Review"Matt de la Pena has done the impossible; fired a perfect fastball on the low inside corner and hit a towering home run at the same time. A tough, funny, edgy, hopeful story about friendship under fire and love in its true sense."-Chris Crutcher, author of Deadline and Whale Talk"Mexican Whiteboy...shows that no matter what obstacles you face, you can still reach your dreams with a positive attitude. This is more than a book about a baseball player--this is a book about life."-Curtis Granderson, New York Mets outfielderAn ALA-YALSA Top Ten Best Book for Young AdultsA Junior Library Guild Selection
1 Vote

This novel starts out with a simple plot: a boy moves to his cousin's home, who is very popular. The boy is just about the complete opposite of his cousin, Sofia. Danny is shy, doesn't talk much (because he is ashamed of his non- Mexican accent), and doesn't understand the fashion style in Sofia's world. Sofia introduces him, gets him started in school, and Danny begins his story slowly, revealing his anxiety and self-mutilation problems. A few chapters into the book, an African-American/Spanish boy named Uno enters the story, from his point of view.