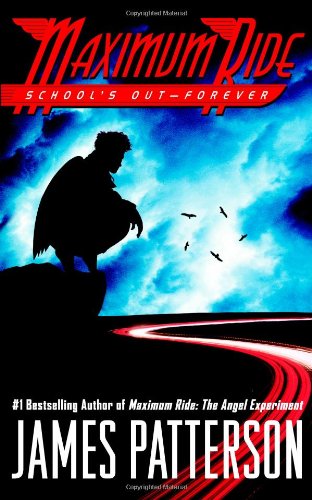 In this eagerly awaited follow-up, brave bird-kid Max and her flock are discovered by an FBI agent and forced to go to "school." There is no such thing as an ordinary day as Max deciphers how and when she's supposed to save the world, and she faces her greatest enemy--a clone of herself. Little, Brown and Company
2 Votes

Maximum Ride is destined to save the world. Max is constantly worried about her flock of mutant bird-kids as Erasers, including Max's younger brother, continually attack them. Erasers are kids that morph into wolves, and recently they've been given wings, so though they can't fly nearly as well as Max and her flock. The six kids have just escaped the School where one experiment after another was conducted on them. They are on their way to Washington to find their families, but the Erasers show up and Fang, a member of the flock, is seriously injured.

What's this?
Maximum Ride: Schools Out Forever review by JMc

Fresh out of New York City, Max Ride and her flock of human- avian hybrids fly to Washington D.C. to locate their parents. On their way, Fang, one of the older flock members, gets his side cut by flying Erasers, human-wolf hybrids, including Ari, who Max supposedly killed in the first book. The flock then goes to a hospital, where an FBI member meets them and lets them stay in her house. Things aren't as they seem to be, and the flock eventually finds themselves in Florida, investigating a major company who will supposedly blow up the world.