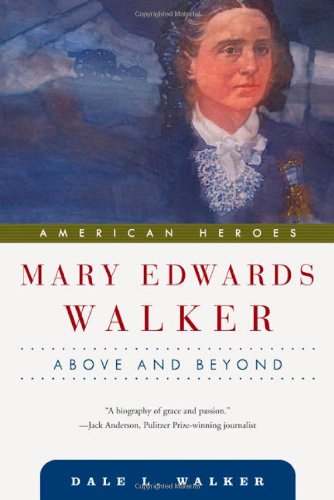 Mary Edwards Walker
Dale L. Walker
Mary Edwards Walker (1832-1919) defied the conventions of her era. Born and raised on a farm in Oswego, New York, Walker became one of a handful of female physicians in the nation-and became a passionate believer in the rights of women. Despite the derision of her contemporaries, Walker championed freedom of dress. She wore slacks-or "bloomers" as they were popularly known-rather than the corsets and voluminous ground-dragging petticoats and dresses she believed were unhygenic and injurious to health. She lectured and campaigned for woman's suffrage and for prohibition, and against tobacco, traditional male-dominated marriage vows, and any issue involving the sublimation of her sex.From the outset of the Civil War, Walker volunteered her services as a physician. Despite almost universal opposition from army commanders and field surgeons, Walker served at Manassas, Fredericksburg, Chancellorsville, Chickamauga, and other bloody theaters of the war. She ministered to wounded and maimed soldiers and civilians on both sides of the conflict. Captured by Confederates near Chattanooga in 1864, she served four months in a Southern prison hellhole where she nursed and tended to wounded prisoners of war.For her services in the war, in 1865 Mary Edwards Walker was awarded the Medal of Honor, becoming the only woman in American history to receive the nation's highest award for military valor.
1 Vote

In this short biography of Mary Walker, Dale Walker gives glimpses into the history of medicine, the world of women's fashions, prisons of the Civil War, and the beginning of the campaign for women's vote. Mary Walker was born in 1832 in upstate New York to freethinking parents who insisted that the four girls work on the farm and wear clothing that allowed amble circulation of blood. Not only did she follow her father's suggestions for attire, she also followed him into the medical profession and became one of the first female doctors in the Unites States.