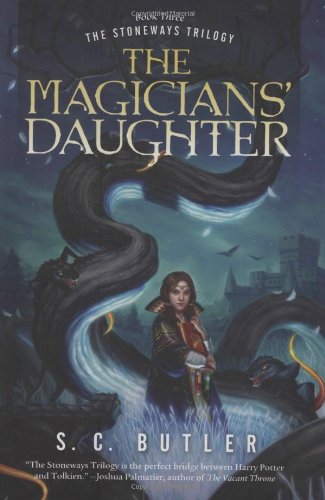 The Magicians' Daughter
S. C. Butler
In Reiffen’s Choice we learned how Reiffen chose magic.In Queen Ferris, we learned what he did with his magic.In The Magicians’ Daughter, we learn what his magic does to him. Ten years have passed since Ferris, Reiffen, and Avender raised the siege of Rimwich and killed two of the three Wizards.  Ferris and Reiffen have married, and their daughter Hubley is approaching her tenth birthday.  Despite the years of peace, Reiffen believes the last of the Wizards, his old teacher and enemy Fornoch, wants to kidnap Hubley the same way he once kidnapped Reiffen.  As Reiffen’s fear grows increasingly irrational, Avender attempts to intervene.  But Avender's help simply drives Reiffen further into madness.  And what happens to Avender is almost worse.Now, with the help of her mother and all her old friends, including Redburr the Shapeshifting Bear, Nolo the Dwarf, and the mysterious magician Mims, Hubley must do what she can to rescue her father from the consequences of his own madness.And all the while the manderstone is growing in Issinlough . . . and no one knows what’s inside.
1 Vote

It has been ten years since Reiffen, Ferris, and Avender raised the siege of Rimwich and killed two of the three Wizards. Now, Ferris and Reiffen are married and raising their daughter, Hubley. Their peace is haunted with the fear that the last Wizard, Reiffen's old teacher and enemy Fornoch, wants to kidnap Hubley. Reiffen's paranoia turns him against everyone he loves. Now, with the help of her mother and all her friends, Hubley must try to save her father from himself.