Magic to the Bone 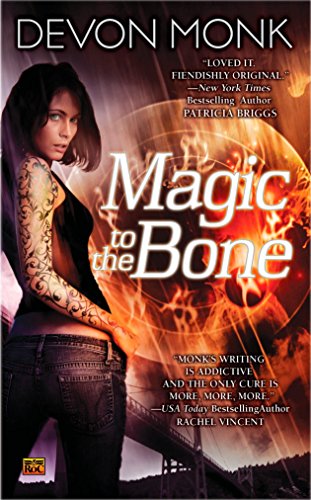 Magic to the Bone
Devon Monk
Devon Monk is casting a spell on the fantasy world...Using magic means it uses you back, and every spell exacts a price from its user. But some people get out of it by Offloading the cost of magic onto an innocent. Then it’s Allison Beckstrom’s job to identify the spell-caster. Allie would rather live a hand-to-mouth existence than accept the family fortune—and the strings that come with it. But when she finds a boy dying from a magical Offload that has her father’s signature all over it, Allie is thrown back into his world of black magic. And the forces she calls on in her quest for the truth will make her capable of things that some will do anything to control...
1 Vote

Magic to the Bone by Devon Monk tells the tale of 25-year- old Allison Beckstrom, daughter of the prominent businessman responsible for the discovery and distribution of magic. Though Allie could be living a luxurious life as part of her father's company, she avoids her father entirely along with his magical influence. Instead, she works as a hound, someone who tracks magical "offloads" (placing the consequences of magic on another person), and lives in the one of the worst neighborhoods in Portland.