The Madhouse of Love 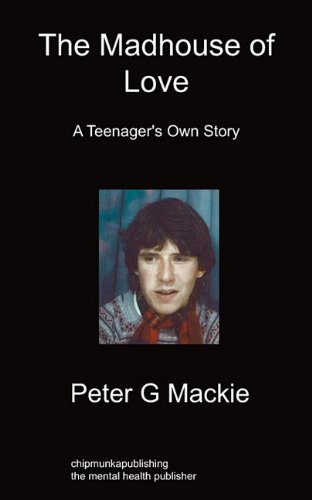 The Madhouse of Love
Peter G Mackie
Description Written at the age of 17, "The Madhouse of Love" is the story of a 12-year-old who is kept in a psychiatric unit for 2½ years in Scotland in the late 1960s due to a misunderstanding. During his stay in the hospital, he falls in love with a girl who is also a patient, but their relationship is put a stop to by the authorities, leading them both to contemplate suicide. Eventually, Tony manages to discharge himself by using a great deal of tact and persuasion but eventually ends up homeless in London at the age of 16. About the Author Peter G. Mackie was born in Perth, Scotland in 1957 and, as a teenager, spent 2½ years in an Adolescent Unit, causing him to lapse into depression. In the 1970s and '80s, he spent several years living and working abroad, which helped him see a more positive side of life. However, in recent years, his depression has returned, along with panic attacks. He is currently attending Redhall Walled Garden, a project in Edinburgh run by the Scottish Association for Mental Health (SAMH), where he is doing a computer course.
1 Vote

In the book The Madhouse of Love, by Peter G Mackie is a very challenging read, but leaves you in awe. His true, yet dramatic tale of his own experiences in life may leave an impact on the reader. Tony Whitfield was a young teenager at the time of his admittance to the Adolescent Unit of a psychiatric hospital. Being only around the age of 12, he merely was "acting the goat". Tony spent nearly his whole teenage life in and out, not wanting to part with the life he grew to love and accept.