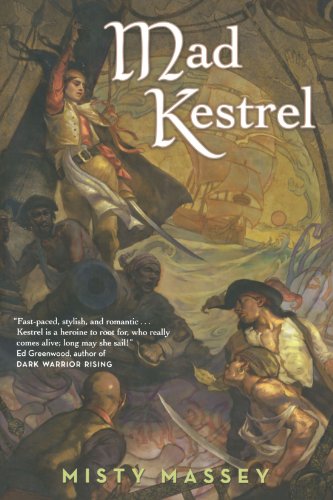 Mad Kestrel
Misty Massey
A rip-roaring pirate romance and mysteryIn a world where infants with magical powers are torn from their parents to be raised by the mysterious and powerful Danisoba, who have a monopoly on magic, Kestrel has managed to keep her abilities concealed―and herself free. First hiding in back alleys as a street urchin, she hid when they killed her parents, and then served as a young tavern maid before escaping to sea, where magic is cancelled by water. Now an adult, as the quartermaster of a pirate ship, Kestrel loves the freedom of living on the seas. But her way of life could end if anyone on board learns her closely guarded secret―that she has magical control over the wind. One day a black ship appears, and her life changes. Its captain is a handsome rogue of whom Kestrel is strangely, constantly aware. When Kestrel's captain is led into a trap and is arrested, she gathers her crew and sets sail in relentless pursuit. . . .
1 Vote

Kestrel, a girl pirate, leads a life full of adventure. She grew up on the streets, eventually finding wowrk in a local tavern. She then signs on as a crew member of the Wolfshead. One day Kestrel sees a "ghost ship" during a storm. This ship takes shelter in Kestrel's home town's harbor, along with the Wolfshead. While they're there, Kestrel's Captain, Artie, is arrested and taken on a Navy ship to be hanged. He leaves Kestrel his log book, instructing her to take it to Lig, the King's advisor.