The Lord of Opium 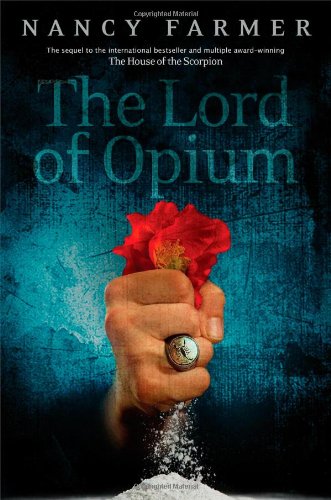 The Lord of Opium
Nancy Farmer
As the teenage ruler of his own country, Matt must cope with clones and cartels in this riveting sequel to the modern classic House of the Scorpion, winner of the National Book Award, a Newbery Honor, and a Printz Honor.Matt has always been nothing but a clone—grown from a strip of old El Patron’s skin. Now, at age fourteen, he finds himself suddenly thrust into the position of ruling over his own country. The Land of Opium is the largest territory of the Dope Confederacy, which ranges on the map like an intestine from the ruins of San Diego to the ruins of Matamoros. But while Opium thrives, the rest of the world has been devastated by ecological disaster—and hidden in Opium is the cure. And that isn’t all that awaits within the depths of Opium. Matt is haunted by the ubiquitous army of eejits, zombielike workers harnessed to the old El Patron’s sinister system of drug growing—people stripped of the very qualities that once made them human. Matt wants to use his newfound power to help, to stop the suffering, but he can’t even find a way to smuggle his childhood love, Maria, across the border and into Opium. Instead, his every move hits a roadblock, some from the enemies that surround him…and some from a voice within himself. For who is Matt really, but the clone of an evil, murderous dictator?
1 Vote

It's 2137, and a new Lord of Opium has come into power. Matt was once just a lowly clone, but after the events of The House of the Scorpion and the death of El Patron, he finds myself in a completely new and completely perilous situation. He has to gain the respect of all of El Patron's allies. He must protect the ecological biosphere in his land, and free the eejits from their zombielike trances. Not only that, but he must prevent the deaths of those he loves--including Maria. And above all, he must protect Opium, the largest land in the Dope Confederacy, without Tam Lin.