Lord of the Libraries 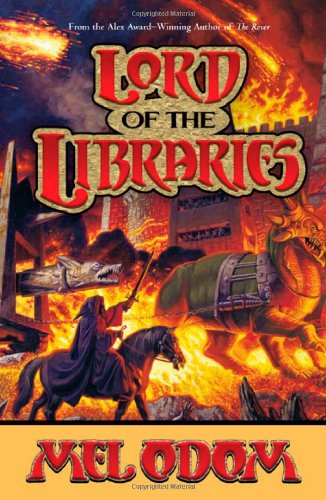 Lord of the Libraries
Mel Odom
In The Destruction of the Books, the Vault of All Known Knowledge was destroyed and its learned caretaker abducted , leaving the forces against darkness without resource and leadership.The world as they know it and all that is good are now threatened by the same shadows that have oppressed the continent beyond the sea.The only hope for enlightenment and salvation lies in a lowly librarian adventurer named Juhg who unknowingly brought about the cataclysm. He now must save the day by seeking out his master and another store of knowledge that has been held in secret. In doing so, Juhg will unlock the mysteries of the past so as to allow the emergence of a new guardian....The Lord of the Libraries.
1 Vote

Dwellers are librarians. They don't fight; they protect books. They are quick on their feet and their intelligent minds tell them to hide at the first sign of danger. Jug is a dweller. He is also a First-level Librarian at the Vault-of- all-Known-Knowledge. When the grandmagister is kidnapped while rescuing Jug after a trap is set off in the Vault-of-all-Known-Knowledge, Jug is heart-broken. He goes in pursuit on the ship One- eyed Peggie.