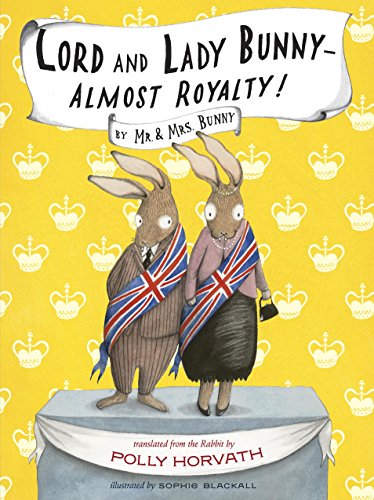 Lord and Lady Bunny--Almost Royalty!
Sophie Blackall, Polly Horvath
This hilarious sequel to Mr. and Mrs. Bunny-Detectives Extraordinaire! is a bunny-rific "tail" that even includes a guest appearance by J. K. Rowling a.k.a. "Oldwhatshername". Madeleine wants nothing more than to save money for college, but her impractical, ex-hippie parents are broke. When the family unexpectedly inherits a sweet shoppe in England that has the potential to earn serious profit, they see an answer to all their problems. . . . Meanwhile, Mr. and Mrs. Bunny—formerly of the detecting persuasion—are looking for new professions, and Mrs. Bunny decides she would like to be Queen. Soon they, too, are headed across the pond. Brought to you by National Book Award-winning author Polly Horvath and Caldecott Medal–winning illustrator Sophie Blackall, the adventures of Madeleine and the Bunnys are zanier than ever.
1 Vote

This book is about two familes who each want a little bit of adventure.  Mrs. Bunny decides that she wants to be the Queen and the family heads over to England.  Mr. and Mrs. Bunny seem to have a lot of arguments.  They are both very funny.  Mrs. Bunny doesn't quite get what she wants in the end, but I think they are all happy anyways.  Madeline's family gets a candy shop with a magic pop tart and they go to England as well.  Her parents don't really like to work though and it doesn't really work out the way they wanted it to.