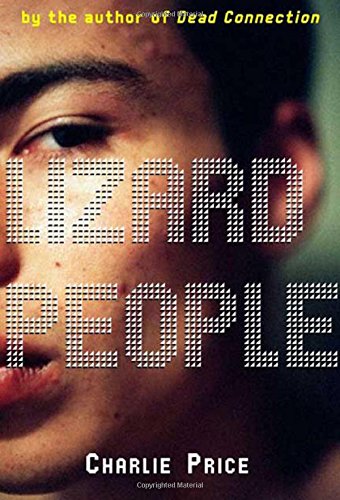 Lizard People
Charlie Price
YOU MEET THE NICEST PEOPLE IN THE LOBBY OF A PSYCHIATRIC HOSPITAL.  The author of Dead Connection proves that what goes on in our minds just may be the scariest thing of all. Ben Mander's junior year is derailed when his mentally ill mother erupts in the school office.  Visiting her in the psych hospital, Ben meets Marco, who also has a mentally ill mother.  Marco tells a story that turns Ben's idea of reality upside down.  Soon, the story begins to uncomfortably mirror Ben's own life.  Lizard People races along the edge of madness as Ben wrestles with his greatest fear--that deep within him lie the seeds of his own insanity.
2 Votes

Ben thought his junior year of high school couldn't get any worse. After his mother suffered another mental breakdown, he was scared of the road ahead, even though she was locked up in an institution for three days. Her mental health had declined ever since Ben's dad had abandoned them. In the waiting room of the hospital, Ben met an older boy named Marco whose mom was also in the institution. Ben is intrigued by Marco because he tells incredible stories about time travel. Ben sets out to discover where Marco's been, and where the rest of Marco's family is.

For the past few years, Ben's mother has been growing steadily stranger. She talks of lizards dressed as people, who hate the color red and can only be identified by a seam in the back of their mouths. She has even gone so far as to attack people in searching for the proof that they are lizards bent on destroying the human race, and has been hospitalized quite a few times. And now Ben's father has walked out- so what's a seventeen year old boy to do when left to take care of a crazy woman?