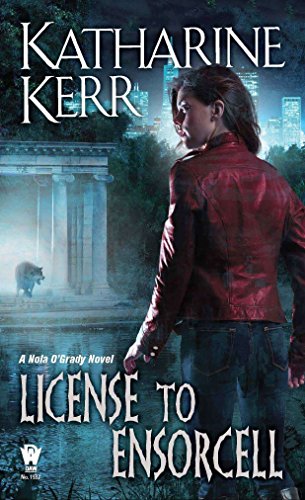 License to Ensorcell
Katharine Kerr
Psychic Agent Nola O'Grady isn't sure returning to San Francisco, and living near her unusual family, is a good idea. Her job, with a psychic agency so obscure even the CIA doesn't know it exists, can be perilous, and she's afraid of the relatives getting involved. Then the Agency saddles her with Israeli secret agent Ari Nathan, and she has a bigger problem on her hands, because tact and compromise are not Ari's strong points. Their mission is to track down a serial killer obsessed with werewolves. He sees them everywhere and shoots whenever he thinks he has one in his sights. Ari assumes the man's psychotic, but in truth he's murdering actual werewolves. Nola should know. Her younger brother Pat, a lycanthrope, was the first victim. Can Nola's psychic talents and Ari's skill with guns keep them alive long enough to unravel the greater mystery behind the killings? Can they save the werewolves and the world while stopping Nola's family from running headlong into danger?
1 Vote

License to Ensorcell is a mixture of mystery, adventure, romance, and the supernatural. The main character is a psychic agent, Nola O'Grady, who is assigned to work with Ari Nathan, an aggravating agent working for Interpol, in order to solve her most recent case. It involves a serial killer, running through the streets of San Francisco, killing werewolves every chance he gets. Ari believes the man is purely crazy but Nola knows better, as her own brother was a werewolf himself before he turned up dead.