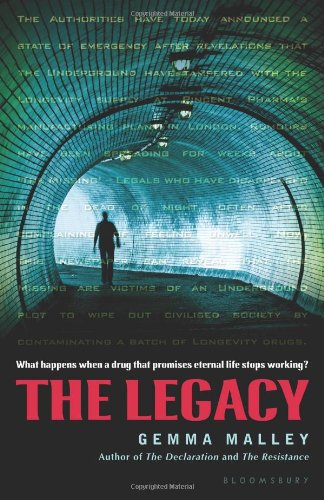 The Legacy
Gemma Malley
When a Pincent Pharmaceutical van is ambushed by the rebel group known as the Underground, its contents come as a huge surprise-not drugs, but corpses in a horrible state. It appears that the pharmaceutical company's top drug, Longevity-which is supposed to eradicate disease and ensure eternal life-isn't living up to its promises. Now a virus is sweeping the country, killing hundreds in its wake, and Longevity is powerless to fight it. But when the unscrupulous head of Pincent claims that the Underground is responsible for releasing the virus, it's up to Peter, Anna, and their friends to alert the world to the terrifying truth behind Longevity before it's too late.
1 Vote

Would you want to live forever? But what if there was a price? The drug Longevity can do just that, keeping your cells at a state of eternal youngness and making death something abnormal a person chooses to do. Here lies a problem. If no one is dying and there are still children being born the world's resources will be quickly used up. The solution to this dilemma is making a declaration for people to sign that if they are going to start using Longevity at age sixteen they can never have children.