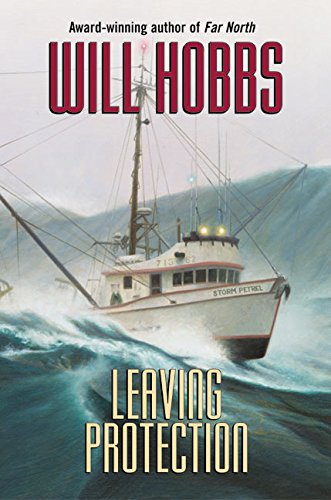 Leaving Protection
Will Hobbs
When sixteen-year-old Robbie Daniels leaves Port Protection, Alaska, for the nearby fishing town of Craig, king salmon season is less than forty-eight hours away from starting without him. The few salmon fishermen who can afford to hire help have already found their deckhands, and time is running out on Robbie's dream of fishing the open ocean for kings.A tip from a teacher puts Robbie on the trail of a legendary captain named Tor Torsen, but when Robbie boards Tor's fishing troller without permission, he happens upon a piece of Russian history that Tor would do just about anything to hide. Then Tor surprises Robbie by hiring him on, but for reasons darker than Robbie ever could guess.Catching king salmon from dawn till dusk, Robbie thinks himself lucky -- until he discovers his captain's true intentions. Tor is searching along the coastline for historic metal plaques buried by early Russian explorers laying claim to Alaska. When Robbie finds out how valuable these possession plaques are, he fears he may know too much to survive. Tor's wrath and a violent storm at sea put Robbie's courage and wits to the ultimate test.
1 Vote

This book is about a boy named Robbie who tries to get a job as a fisherman. He has always wanted to be a fisherman. He thinks he is happy when he becomes a fisherman, but as he works for a man named Tor, Robbie discovers that Tor has more of an intention than catching fish. Robbie discovers that Tor is trying to find a very valuable plaque. Robbie is dragged out farther to sea, and learns that he will have to face a violent storm, that will test his courage to try to save somebody's life and risk his life at the same time.