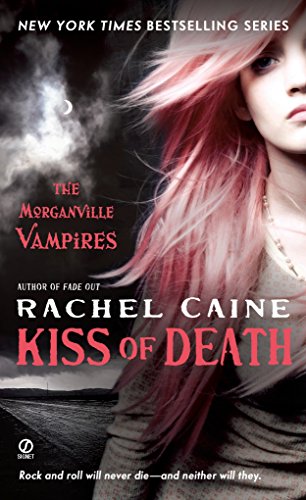 Kiss of Death
Rachel Caine
A new chapter in the New York Times bestselling Morganville Vampires saga. Vampire musician Michael Glass has attracted the attention of a big- time producer who wants to cut a demo and play some gigs-which means Michael will have to enter the human world. For this, he's been assigned escorts that include both a dangerous immortal as well as Michael's all-too-human friends. And with that mix of personalities, this is going to be a road trip from hell...
1 Vote

There are vampires and humans in the town of Morganville. Only eight of those humans have the ability of getting to stay alive. By wearing a special pin, Eve, Claire, and Shane, have the ability of not getting their blood sucked. Sounds good huh? Well, Micheal, Eve's boyfriend, is a vampire, but he's a good one. When the four friends/ two couples, go on a trip to Dallas, they are escorted by an elderly vampire named Oliver.