The Kingdom on the Waves 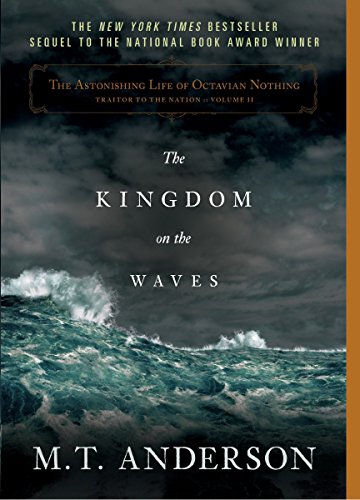 The Kingdom on the Waves
M.T. Anderson
Sequel to the National Book Award Winner!"A novel of the first rank, the kind of monumental work Italo Calvino called ‘encyclopedic’ in the way it sweeps up history into a comprehensible and deeply textured pattern." — THE NEW YORK TIMES BOOK REVIEW (Age 14 and up)Fearing a death sentence, Octavian and his tutor, Dr. Trefusis, escape through rising tides and pouring rain to find shelter in British-occupied Boston. Sundered from all he knows — the College of Lucidity, the rebel cause — Octavian hopes to find safe harbor. Instead, he is soon to learn of Lord Dunmore's proclamation offering freedom to slaves who join the counterrevolutionary forces. In Volume II of his unparalleled masterwork, M. T. Anderson recounts Octavian's experiences as the Revolutionary War explodes around him, thrusting him into intense battles and tantalizing him with elusive visions of liberty. Ultimately, this astonishing narrative escalates to a startling, deeply satisfying climax, while reexamining our national origins in a singularly provocative light.
1 Vote

Tweet
The Kingdom on the Waves review by CWay_RPEMS

In the first book in the series, The Pox Party, we leave Octavian Nothing and his tutor, Dr. Trefusis, fleeing from captivity to Boston, which is now occupied by the British. Octavian, now an orphan, acquires a job as a violinist to pay for their housing in Boston. When the rebels attack Boston and take it back, Octavian is no longer safe and travels to Virginia with Dr. Trefusis to enlist in the King's royal army. The former governor of Virginia, Lord Dunmore, has been overthrown by the colonists and is freeing any Negro who joins his army, so he can attempt to take back Virginia.