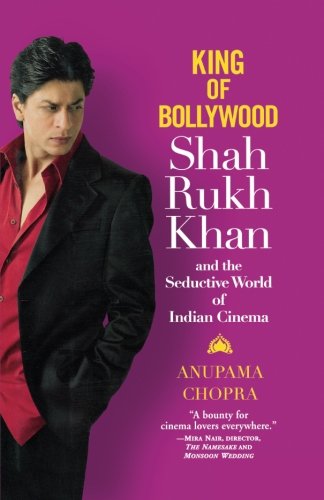 King of Bollywood Shah Rukh Khan
Anupama Chopra
Here is the astonishing true story of Bollywood, a sweeping portrait about a country finding its identity, a movie industry that changed the face of India, and one man's struggle to become a star. Shah Rukh Khan's larger than life tale takes us through the colorful and idiosyncratic Bollywood movie industry, where fantastic dreams and outrageous obsessions share the spotlight with extortion, murder, and corruption. Shah Rukh Khan broke into this $1.5 billion business despite the fact that it has always been controlled by a handful of legendary film families and sometimes funded by black market money. As a Muslim in a Hindu majority nation, exulting in classic Indian cultural values, Shah Rukh Khan has come to embody the aspirations and contradictions of a complicated culture tumbling headlong into American style capitalism. His story is the mirror to view the greater Indian story and the underbelly of the culture of Bollywood."A bounty for cinema lovers everywhere." --Mira Nair, Director, The Namesake and Monsoon Wedding "King of Bollywood is the all-singing, all-dancing back stage pass to Bollywood. Anupama Chopra chronicles the political and cultural story of India with finesse and insight, through fly-on-wall access to one of its biggest, most charming and charismatic stars." -- Gurinder Chadha, director of Bend it Like Beckham "The "Easy Rider Raging Bull" of the Bollywood industry and essential reading for any Shah Rukh Khan fan." --Emma Thompson, actress"Anu Chopra infuses the pivotal moments of Shah Rukh Khan's life with an edge-of-your-seat tension worthy of the best Bollywood blockbusters." --Kirkus
1 Vote

Shah Rukh Khan is a middle class Muslim boy from Delhi, India who has always dreamed of being a star. This is the story of how he is thrown out of his fatherless, friendless world into the enthralling and enticing land of Bollywood. He soon learns that not all that glitters is gold- from failing movies to violent mafia members, Bollywood is not for the weak of heart. The book gives the story of Shah Rukh Khan's life, from his birth to the present. It is a biography about Bollywood's number one star.