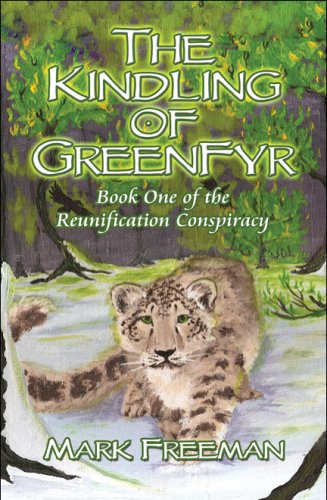 The Kindling of Greenfyr
Mark Freeman
The Kindling of GreenFyr is the story of Owen McInish, an awkward fourteen-year-old bullied at school and friendless except for his pet cat, Piper. That is until a snow leopard is chased through the woods behind his house by three huge gray dogs with glowing green eyes. Owen saves the leopard from her pursuers, but the animal escapes him as well, only to return later. The cat’s behavior is peculiar, nothing like a wild animal, making Owen even more curious as to its origin. Eventually, the cat allows Owen to pet her. Owen finds himself experiencing friendships as he has never before. Adventures as he has never imagined. And political intrigue as two worlds, long separated, begin to collide.
1 Vote

Owen was just a lonely boy living in a sleepy snowy town. He was the kind of boy who finds a cozy spot in his room and reads with his cat, but he was also the kind of boy who sneaks out through his window to take walks in the woods. During one of these walks, his entire life changes when he meets a snow leopard. When Owen saves the snow leopard from a pack of crazy dogs, he sets a whole chain of events in place that take him to a world unknown to humans. A world of fairies and troll, shapeshifters and sorcerers.