Killing Miss Kitty and Other Sins 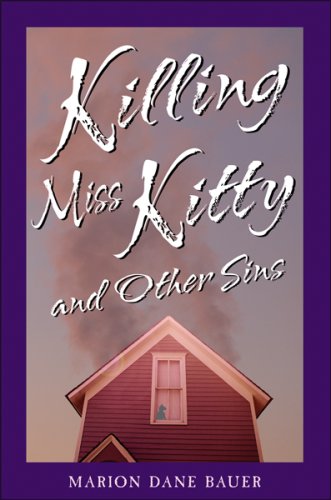 Killing Miss Kitty and Other Sins
Marion Dane Bauer
Life in Claire’s typical Midwestern town is quiet; some would even say boring. But this is the 1950s, and things that seem calm on the surface are often churning underneath. When Claire takes a new black friend, dressed as Liberty,” to the Fourth of July parade in the town park, she realizes there can be no liberty for either girl in her all-white town. And as she grows older, she discovers that her world is more complicated than she ever imagined.Being the new girl” in school isn’t the fresh start she was hoping for. Getting a pet involves sacrifices. And falling in love is more confusing than fulfillingespecially when it is not a love that can be spoken of, least of all by Claire.Teenage sexuality, northern segregation, differing religious beliefs, and animal cruelty are just a few of the controversial topics explored in this collection of five interrelated stories, told in a voice that is both refreshingly naive and darkly humorous. With this book, Marion Dane Bauer lives up to her reputation as a writer who is not afraid to delve into difficult material in search of the truth.
1 Vote

Tweet
Killing Miss Kitty and Other Sins review by MW

Killing Miss Kitty and Other Sins by Marion Dane Bauer is a collection of five fictional short stories that are based on Marion Dane Bauer's childhood. Claire, the protagonist in each story, is a lovable character with an innocence and an interest in writing. Based in the 1950s the stories discuss issues of the time (and of more recent years as well); segreation, one's relationship with God, the truth, and learning about one's sexuality. The first story describes Claire's interaction with Dorinda, a black girl who stays in Claire's town for the summer.