The Keys to the Kingdom-Grim Tuesday 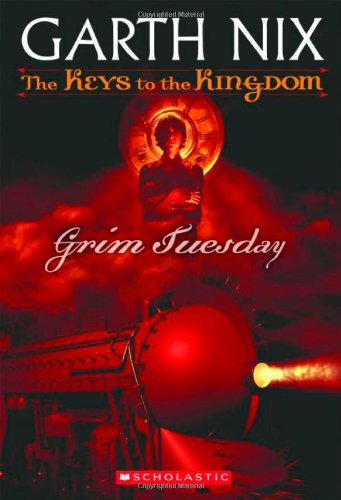 The Keys to the Kingdom-Grim Tuesday
Garth Nix

Arthur Penhaligon's magical adventures continue as he faces a new grave danger -- in the form of an enemy named Grim Tuesday. More amazing fantasy from best-selling author Garth Nix.Arthur doesn't think he will ever have to return to the strange house that nearly killed him on Monday -- the house that contains an entire world. But Tuesday brings new challenges -- in the form of an enemy named Grim Tuesday, who threatens the well-being of both Arthur's family and his world. Arthur must retrieve the Second Key from Grim Tuesday in order to save everything -- an adventure that will include stealing a Sunship, surviving a very weird work camp, befriending a bearlike spirit, fighting the voidlike Nithlings, and traveling to the scary Far Reaches for the ultimate showdown.
2 Votes

Tweet
The Keys to the Kingdom-Grim Tuesday review by JMc

Arthur Penhaligon endures horrible creatures made from Nothing, an endless Pit from which he can't escape, and a very important lazy bear in Garth Nix's book Grim Tuesday. Arthur Penhaligon gets trapped in the Pit of the Far Reaches of the House. His quest is to find and acquire the Second Key to the Kingdom. On his journey, he finds Part Two of the Will, but it is in disbelief. All of this is even more urgent, because Grim's Grotesques are trying to steal all of Arthur's family's possessions.

What's this?
The Keys to the Kingdom-Grim Tuesday review by AG

In this second book in The Keys to the Kingdom series, the main character, Arthur Penhaligon, returns to a mysterious realm in an attempt to save his homeland, Earth. He will once again have to defeat one of the days, an immortal being called Grim Tuesday, to gain possession of the second key. Arthur must win the key in order to save his family and his world. After surviving a series of large obstacles, it all comes down to a small contest, but a contest that Arthur has almost no chance of winning.