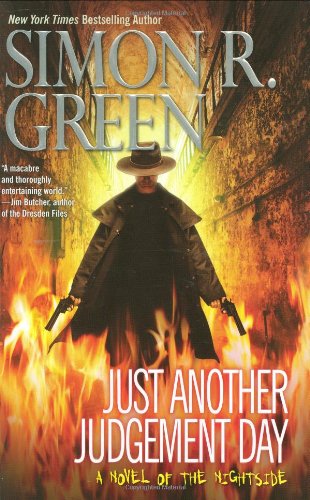 Just Another Judgement Day
Simon R. Green
Just another success from the New York Times bestselling author God's own enforcer, the righteous engine of destruction known as the Walking Man, has come to the Nightside. His sole purpose is the elimination of the wicked and the guilty, which means no one will be left in the Nightside once he gets started. So the Authorities have hired P.I. John Taylor to stop him. Legend has it that he can't be killed. Taylor is very much hoping that the legend isn't true.
1 Vote

Just Another Judgment Day by Simon R. Green is novel about the city of Nightside, which is the sinful parallel of London in another universe. Every kind of sin is practiced here. God sends the Walking Man to destroy all Evil doers. The only problem is that in Nightside, everyone is connected with sin in one way or another. The Walking Man was destroying all of Nightside. A private investigator named John Taylor and a holy Sikh monster hunter named Chandra Singh are sent by the Authorities in Nightside to stop the Walking Man.