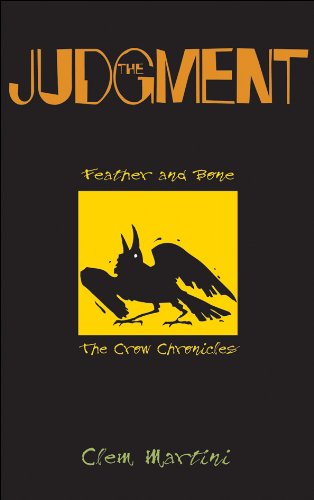 The Judgment- Feather and Bone-The Crow Chronicles
Clem Martini
In the third and final novel of Feather and Bone: The Crow Chronicles, Kyp and the remains of the flock emerge tattered but alive from their fiery ordeal in the human colony. Pursued by the vengeful Kuper and his fanatical Collection, they flee south, outnumbered and exhausted. Flying through a strange land, where food is scarce and unknown enemies lurk, Kyp and the flock search for an elusive haven. This is a time of terrors and dark omens, when crows hunt down fellow crows. The life or death of the deeply divided flock depends on Kyp's decisions. Does he have the wisdom to decide well and grow from popular hero to mature Chooser? The world of crows is turned upside down in the epic battle that follows his Choice.
1 Vote

In The Judgment, the final installment of Clem Martini's trilogy of "Feather and Bone: the Crow Chronicles," Kyp Kym, Kaf, Kata and the others continue their trials through the world of crows. The group struggles with questions of community and responsibility. Traveling to avoid being destroyed by a massive group of crows called The Collection, Kyp's crows hone both their fighting and negotiating skills while learning the importance of fear putting "extra wind under your wings." The world is turned upside down as the crows confront human and other enemies.