Jonas Brothers: Inside Their World 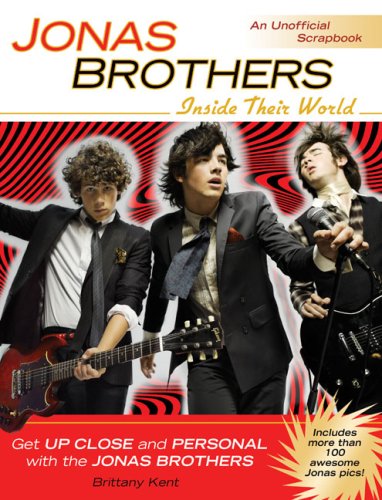 Jonas Brothers: Inside Their World
Brittany Kent
An unauthorized exclusive Jonafied backstage pass to everything Jonas Brothers! Nick, Joe and Kevin Jonas have stepped into the spotlight and taken the world by storm with their hit songs and adorable charm. Following them from their earliest beginnings to their sold out shows nationwide and beyond, this book is bursting with essential fan info. Written by a true fan, itÂ's a rare glimpse of them on tour, on the sets of Camp Rock and their 3D movie, and a behind-the-scenes look at what itÂ's like keeping up with the Jonases. These guys are seriously all over the scene and having an awesome time doing itÂ—and now fans can share in the fun. Loaded with over 100 color photos, quizzes, gossip and behind-the-scenes scoop, itÂ's the only book that truly gets inside the Jonas BrothersÂ' world.
1 Vote

Tweet
Jonas Brothers: Inside Their World review by AFin

Are you a Jonas Brothers fan? If so, this is the book for you! You can learn about their life before they were stars, their songs, their first movie, and their television show. Also, take quizzes, see never-before-seen photos, get behind-the-scenes glimpses, and the scoop on their friends, family, and fans. After reading this, you will know every thing there is to know about the Kevin, Nick, and Joe!