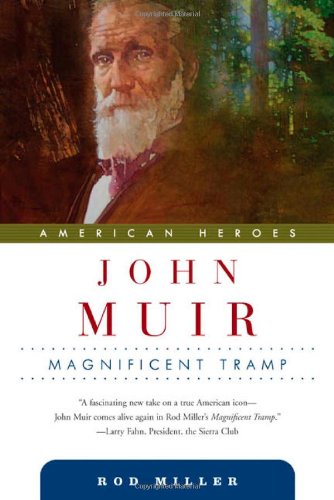 John Muir
Rod Miller
In 1849, 11-year-old John Muir immigrated from Scotland to America. Here, he rose from farmer and sawmill worker to become a noted authority on the botany, glaciers, and forestry of the nation's wilderness. Best known for his long association with the Yosemite Valley and Sierra Nevada Mountains of California, Muir also explored, mostly afoot, the southern States, Alaska, the Great Basin, and the Mojave Desert. His studies of nature took him around the world and generated volumes of poetic, evocative writings. As America expanded relentlessly westward, Muir witnessed the plunder and exploitation of the land and became a driving force in efforts to protect the natural world. A modest and private man, married and father of two doting daughters, his conservationist views forced him into battle with powerful political and industrial interests. Some battles he won, influencing four US Presidents to sponsor legislation that protected forests and established or expanded America's national parks. Muir lost his last, and perhaps most personal battle. He fought until near the end of his life to prevent the Hetch Hetchy Valley in Yosemite National Park from becoming a reservoir for the city of San Francisco. Some of his conservationsist friends believed the conflict so sapped his physical, emotional, and spiritual strength that it contributed to his death. Remembered as the founder of the Sierra Club, father of America's conservation movement, and architect of a still growing wilderness ethic, Muir set an example many still follow, fighting today's threats to the environment.
1 Vote

From John Muir's childhood in Scotland to his adventures in Yosemite, Alaska, and in numerous other places between, Rod Miller describes the life of the mountaineer and explorer who was a driving force in the creation of many national parks in the western part of the United States. Detailed descriptions of all of Muir's life are provided, and Mr. Miller leaves nothing unexplained. Each chapter tells about a different part of Muir's life, and Mr. Miller revisits the same event two or three times to give a different perspective of it.