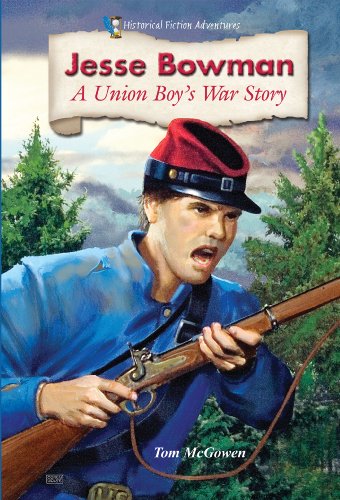 Jesse Bowman
Tom McGowen
In this action-packed historical fiction novel, Jesse Bowman joins the Union Army in hopes of finding adventure. However, this teenage soldier learns that victory comes at a great cost. He discovers the hardships of war, the horror of battle, and the loss of friendship on his journey through the Civil War. Join Tom McGowen as he tells the story of one boy s contribution to the Union s triumph over the Confederacy.
1 Vote

Jesse Bowman: A Union Boy's War Story This historical fiction book starts out on the night of April 21, 1861. While attending a meeting, two boys, Jesse Bowman and Harlow Basset, saw the Zovare soldiers for the first time. That's when Jesse and Harlow decided they wanted to become soldiers and fight in the Civil War to help protect the Union. They went to the head desk on Darbon Street. Immediately they too signed up to join the army. They rode a train to the campsite and saw a big pine tree, which was the marking for their campsite.