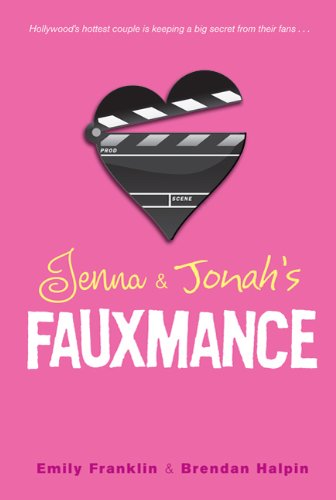 Jenna and Jonah's Fauxmance
Brendan Halpin, Emily Franklin
Fans of romance don't need to look any further than the fauxmance brewing between teen idols Charlie Tracker and Fielding Withers-known on their hit TV show as Jenna and Jonah, next-door neighbors flush with the excitement of first love. But it's their off-screen relationship that has helped cement their fame, as passionate fans follow their every PDA. They grace the covers of magazines week after week. Their fan club has chapters all over the country. The only problem is their off-screen romance is one big publicity stunt, and Charlie and Fielding can't stand to be in the same room. Still, it's a great gig, so even when the cameras stop rolling, the show must go on, and on, and on. . . . Until the pesky paparazzi blow their cover, and Charlie and Fielding must disappear to weather the media storm. It's not until they're far off the grid of the Hollywood circuit that they realize that there's more to each of them than shiny hair and a winning smile.
1 Vote

Charlie Tracker and Fielding Withers have the job of a lifetime. They play two undercover rockstars on the hit comedy Jenna and Jonah's How To Be a Rockstar and are beloved by millions of tweens across the world. Off- screen, Charlie and Fielding are also involved in a romantic relationship that the papparazzi and tabloids love documenting. However, no one knows that Charlie and Fielding actually hate each other and the relationship is a big publicity stunt for ratings.