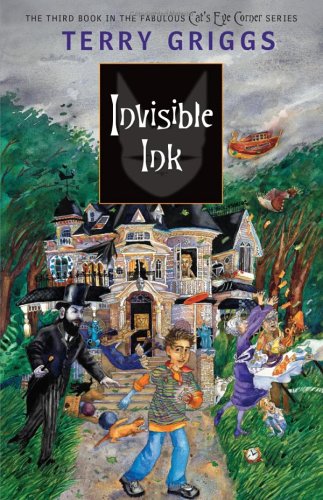 Invisible Ink
Terry Griggs
The third title in this delightful series begins as Olivier, an adventurous 12-year-old boy, is helping his very odd step-step-stepgramma with her equally odd yard sale. When some mysterious customers show up, along with a troublesome wind, Olivier flees the scene, ending up in the Dark Woods, where terrible damage has been done. Determined to get to the source of the trouble, he and his pals travel far afield, encountering curious individuals along the way, including an intellectual giant, a severed but affable head, a malodorous monarch named Queen Bacteria, and a tyrant named Sleek. Olivier must face the dangers armed with only an ordinary stone, a mysterious cracked inkwell containing a liquefied secret, and his trusty pen pal, Murray Sheaffer. Set in a fascinating fantasy world, Invisible Ink is packed with humor and imagination.
1 Vote

A pen named Murray, an empty diamond inkwell that emits splashing sounds, and a depressed Persian carpet are only a few of the things that lead Olivier to believe that his step-step-stepgramma is not an ordinary person. Then at his step-step-stepgramma's yard sale, a woman gives him a conch shell and through it, he hears a call for help from a friend. As he is trying to figure out what to do, a little girl gives him a stone, and a strange man sees and immediately starts chasing him. Of course, by this time, Olivier is extremely confused.