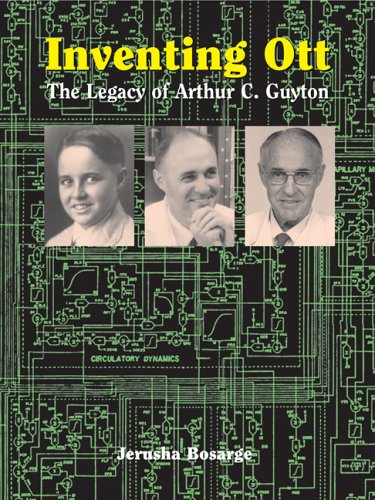 Inventing Ott - The Legacy of Arthur C. Guyton
Jerusha Bosarge
ATTENTION young readers...Have you ever dreamed of becoming a doctor or a scientist? Perhaps you fantasize about being a teacher of an inventor. Did you ever wonder what it was like to be a soldier, a sailor, a carpenter, a writer, or a ham radio operator? Inventing Ott is the story of a Mississippi boy who grew up to become all of the above and more. It is the story of how young "Ott" Guyton became the legendary Doctor Arthur C. Guyton: Chairman of The Department of Physiology and Biophysics at the University of Mississippi School of Medicine, Father of Modern Cardiovascular Physiology, sole writer of many editions of one of the best-selling textbooks of all time, inventor of the electric wheelchair, dear friend of William Faulkner, and father of ten doctors. But most importantly, it is the story of how a young boy's curiosity and love of learning turned into a lifetime of accomplishments. The book is written for young readers (ages 10-14) and offers inspiration and direction for their young minds.
1 Vote

Inventing Ott: The Legacy of Arthur C. Guyton is about the life of a modern-day Renaissance man. Arthur C. Guyton, also known as Ott, was born on September 8, 1919 in Oxford, Mississippi. He would not only become a successful doctor and professor but also a sailor, radio expert, tennis player, pilot, inventor, carpenter, appliance repairman, electrician, husband, and father of ten children. In 1946, Ott caught paralytic polio which led him to invent the power wheelchair, the "walking" leg brace, and a type of hoist for humans.