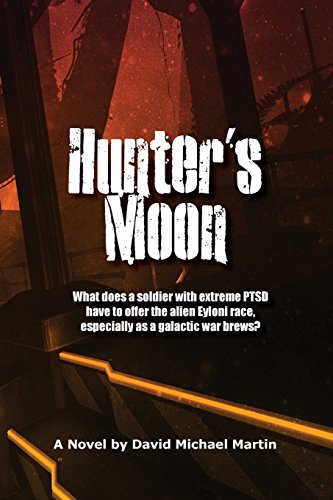 Hunter's Moon
David Michael Martin
Kidahin, of the Eyloni, is on her first mission since her adulthood ceremony when her ship, Hunter's Moon, is attacked. The ship suffers major damage and the crew suffers the devastating loss of its Warleader. While making repairs at a nearby moon, Kidahin's youthful hubris gets her into trouble when she attempts to track a human: Chief Warrant Officer Del Marsch, a topnotch soldier and training officer.Marsch, a hardened veteran, whose family has been senselessly murdered by the brutal Ni'zakhonii, suffers from extreme PTSD, with flashbacks powerful enough he can smell them. But a war is brewing and soldiers must be trained, even on a ship whose current mission is a diplomatic one. Aboard the Henri Edda, Marsch is the best one for the job - until he inadvertently offers to train a young alien.March's agreement with the Mistress of Hunter's Moon to take the inexperienced Kidahin under his wing infuriates Ambassador Harrison, primary human liaison to the Eyloni. He's positive this arrangement could drive a wedge into the diplomatic relationship. But the power-hungry diplomat knows little of the culture of the Eyloni - and even less about the Ni'zakhonii.Tensions reach the breaking point when Marsch, compelled to mount a rescue when the Ni'zakhonii capture a group of Eyloni, must make life-changing decisions, even as Harrison is branding him a traitor.
2 Votes

Just as every Eyloni before her, Kidahin becomes an adult when she takes part in the adulthood ceremony. Soon after this important event, she is put to work on the ship Hunter’s Moon. But things do not go as planned and the ship is forced to land on a nearby moon to make repairs. This is where Kidahin meets Chief Warrant Officer Del Marsch. But unlike any other Eyloni before her, she forms a relationship with this human once he offers to train her. This comes as a surprise to both the humans and Eyloni, as they are two very different species.

When an inexperienced Eylonian is assigned her first mission, she unexpectedly encounters a human veteran.