Homicidal Aliens and Other Disappointments 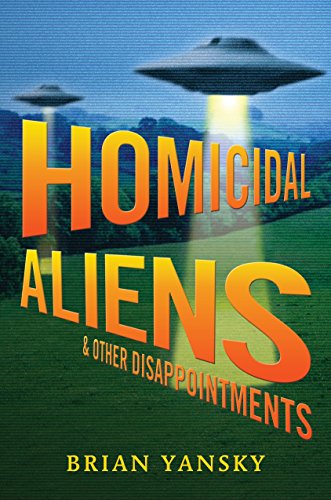 Homicidal Aliens and Other Disappointments
Brian Yansky
The reluctant hero from Alien Invasion and Other Inconveniences is back in all his droll glory — and this time the fate of humankind is on the line.Jesse has had the worst year of his life. First a race of homicidal (but very polite) aliens invaded Earth, killing pretty much everyone and enslaving the few people left behind, including Jesse; his best friend, Michael; his sort-of girlfriend, Lauren; and the girl of his dreams, Catlin. Now Jesse is revered as some sort of Chosen One all because he managed to kill one of the alien lords and escape — even though he’s not really sure how he did it. But it’s hard to argue with the multitude of new talents he is developing, including (somehow) killing aliens with his mind and grasping glimpses of alternate futures. With thousands of aliens already on Earth and thirty million more about to arrive, Jesse has to decide whether to embrace his maybe-destiny before the world is completely destroyed. No pressure.
2 Votes

Tweet
Homicidal Aliens and Other Disappointments review by NathanPechacek10

"I'm sorry for your loss," is an example of how polite these homicidal aliens are throughout this science fiction book.  Murderous aliens aggressively invade Earth, killing everything in sight.  Jesse, a 17 year old boy, has an alien assasin tenaciously tracking him down.  He gets stuck living in a camp to stay protected.  Many hidden camps have formed to help keep the human race living.  Everyone thinks a higher being is guiding Jesse.  With the weight of the human race on his shoulders, will Jesse be able to defend Earth from extraterrestri

What's this?
Homicidal Aliens and Other Disappointments review by vbobrocks

Seventeen-year-old Jesse and his friends have recently escaped slavery to aliens and are living in a rebel camp in relative safety.  As their leader gets weaker, plans for leadership and survival are debated and revised, and all the while Jesse’s mental powers are increasing and changing.  Some rebels begin to believe that he has been chosen by the gods to host the Warrior Spirit and will save them all as the camp’s safety disintegrates.  But before he can, Jesse must decide where his heart lies and come to terms with the power within him.