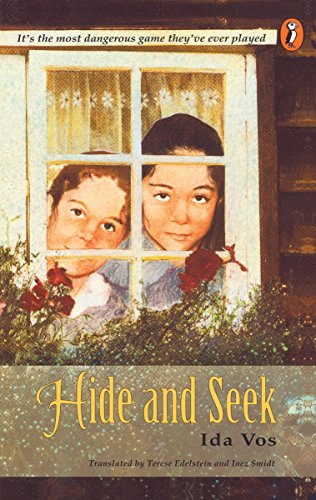 Hide and Seek
Inez Smidt, Terese Edelstein, Ida Vos
Eight-year-old Rachel Hartog, her sister Esther and her parents are forced to go into hiding as the Germans take over their town. At first they stay with Father Thijssen at the Rectory but have to be moved on because they have been discovered. Separated from their parents, the girls go to another house in Venjuizen to stay with Aunt Nel and Uncle Jaap De Lange (to whom the book is dedicated) where they remain until the end of the war. Rachel's first person, present tense narrative draws the reader into her experiences feeling the hurt and confusion. Vos acknowledges that the story of Rachel Herzog is her own. The girls intense fear of going outside after the German defeat, caused by their many years of living inside in fear of discovery, and the letters their family receive telling them of their relatives deaths in concentration camps add depth to the story.
1 Vote

Rachel is eight years old when the Nazis invaded her native country, Holland. Since Rachel is Jewis,h she soon can do fewer and fewer things because of the restricitions placed upon the Jews by the Nazis. As the Nazi occupation worses she must find a way to survive.