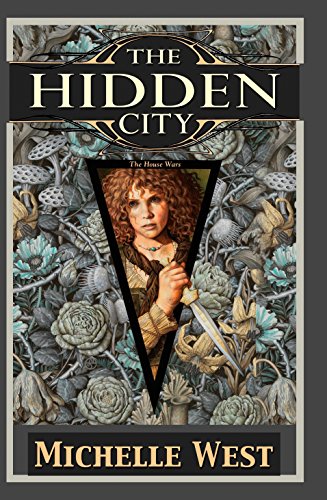 The Hidden City
Michelle West
The Hidden City is the first novel in The House War, a saga of the battle to control the most powerful of the ruling House in the Essalieyan Empire -- House Terafin. But it is also the tale of a remarkable young woman, Jewel Markess. An orphan living in the slums of the capital city, Jewel (known as Jay by her friends) scrapes by however she can. But after she steals money from a recluse named Rath, he seeks her out to reclaim what is his. Discovering her under a bridge and deathly ill, he takes her in and nurses her back to health. But once she has recovered, Jay insists she must repay her debt, and Rath finds that he cannot be rid of her. Driven by visions she can't control, Jay begins to rescue other children and bring them into Rath's home. As Jay forms the group that will become her den, Rath walks a far more dangerous path. After a long-ago betrayal, Rath is estranged from his family, while his sister is The Terafin, head of House Terafin. Rath makes his living by prowling the ruins of the undercity, finding relics of an earlier age and selling them to the highest bidder. But now the demons that once nearly destroyed the Essalieyan Empire are stirring again, reaching out to strike down any who can give warning against them -- like Rath.Soon, Rath, who treads the ancient ways hidden beneath the slums of Averalaan, and Jay, who is cursed with the untrained talent of a seer, will find themselves targeted by these deadly beings.
1 Vote

The Hidden City by Michelle West tells the story of Jewel Markess, also known as Jay, and how she is taken under the wing of Rath. Jay is a peculiar orphan, one with honor and a strangeness about her that is discovered by Rath, a lone scavenger. In a rare act of compassion, Rath nurses the sick girl back to health, and, unable to get rid of her, slowly adopts her to his way of life. Before long Jay is subjected to terrible visions that she cannot control. She is compelled to save children and Rath finds himself and his home over run with orphans.