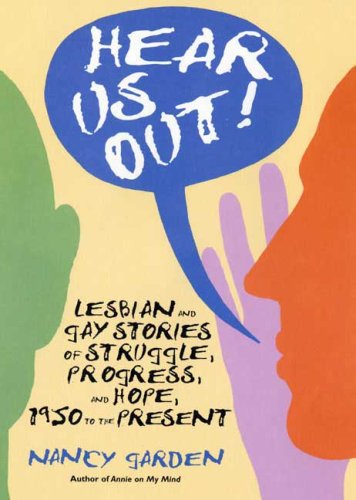 Hear Us Out
Nancy Garden
What was it like being young and gay during the closeted 1950s, the exuberant beginnings of the modern gay rights movement in the 1970s, or the frightening outbreak of HIV and AIDS in the 1980s? In this unique history, Nancy Garden uses both fact and fiction to explore just what it has meant to be young and gay in America during the last fifty years. For each decade from the 1950s on, she discusses in an essay the social and political events that shaped the lives of LGBT (lesbian, gay, bisexual, and transgender) people during that era. Then, in two short stories, she explores the emotional experiences of young gay people coming of age during those times, giving vivid insight into what it really felt like.  Hear Us Out! is a comprehensive and rich account of gay life, both public and private, from one of the pioneers of young adult lesbian and gay literature.
1 Vote

In this collection of reviews and short stories are the struggle, progress, and hope of gays, lesbians, bisexuals, transsexuals, and people who are questioning whether or not they are (GLBT). In each section, 1950- the present, two different stories are told by the people struggling. At the beginning of the section, a summary of the decades progress in acceptance and civil rights and how they effected the lives of GLBTQ emotionally and physically. The stories begin with the lives of Angie and Elizabeth, two best friends who fell in love.