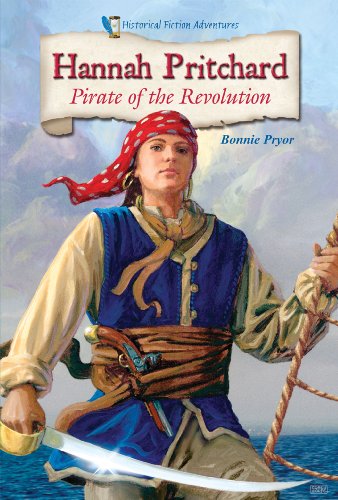 Hannah Pritchard
Bonnie Pryor
Upon finding her family murdered by British redcoats, Tories, and Iroquois Indians, Hannah Pritchard begins a long and difficult journey in search of revenge and adventure. The former New York farm girl wants the opportunity to fight the British, and she finds it aboard an American privateer ship during the Revolutionary War. However, Hannah must hide her female identity to be able to work as a cabin boy aboard the Sea Hawk. Follow Hannah s brave story as this teenager discovers a wild life at sea, forges new friendships, and learns the bittersweet taste of revenge.
1 Vote

Hannah Pritchard: Pirate of the Revolution is about a girl named Hannah who wants revenge on the attackers who killed her family. She goes out on an adventure and meets 2 women who give her work at an inn. Then she sees an ad in the newspaper for a cabin boy on a ship. She knows that girls aren't allowed on ships so she dresses as a boy. She barely gets the job as cabin boy. Dressed as a boy, she tries to keep her secret.