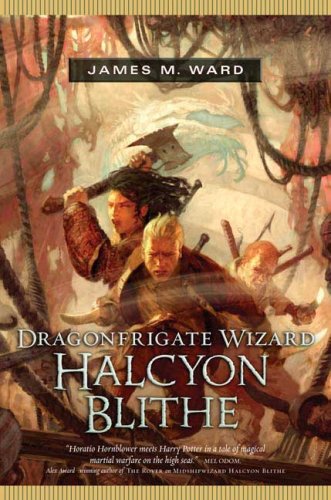 Halcyon Blithe: Dragonfrigate Wizard
James M. Ward
His yeoman voyage now behind him, Blithe must now accept new responsibilities as he ascends to the rank of DRAGONFRIGATE WIZARD HALCYON BLITHE.In the latest chapter of the young wizard's nautical education he finds himself second in command of a captured enemy vessel that must engage a demonship in combat before returning to port. Upon his return he is assigned duty on a dwarven dragonship where he and his shipmates encounter the deceit of politics and diplomacy before they can regain the security of their Arcanian dragonship and the company of their trusted crewmates.Combining elements of Hornblower with Harry Potter, and Robert Louis Stevenson with Robin Hobb, the Halcyon Blithe are nautical tales rich in magic and intrigue set against a panorama of fantastic naval battles as we follow the career of a young midshipwizard as he moves up through the ranks of His Majesty's Navy.
1 Vote

Dragonfrigate Wizard Halcyon Blithe, by James M. Ward, starts as Halcyon Blithe, an Arcanian midshipwizard, heads off to attack a fleet of Maleen ships. They single out one ship in particular, a small ketch. As they attack the ketch, it fires red-hot mortar shells back at them! Halcyon; Ashe Fallow, a friend and countryman of Halcyon's; Denna Darkwater, a half-troll marine; and a few other marines take a rowboat and launch off their dragon ship, the Sanguine, as soon as the ketch has been wounded. Halcyon and his war party quickly take over the ketch, the Salamander.