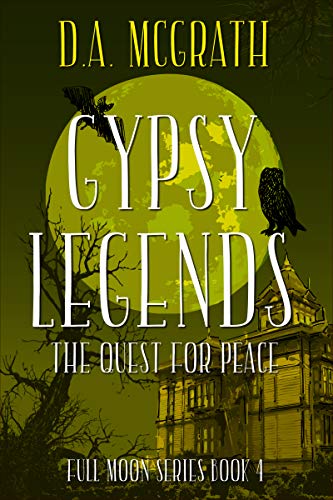 The legend spoke of a new threat, a devastating war that could destroy the Gypsy race - unless the gifted children could prevent it…Clara’s excited. It’ll soon be Christmas break. Two weeks off with cosy lie-ins, delicious hot chocolate and presents to be unwrapped. Not to mention being able to shape-shift to her hearts’ content. But, her friend, Luke, has disappeared off the face of the earth and she longs to know what’s happened to him.Luke’s a Gypsy. He was on the road with his clan when their convoy was viciously attacked. Fleeing the ensuing chaos, Luke finds himself desperate and alone. Not able to trust his own kind, he makes his way to the only non-Gypsy he knows, Clara.While dodging Luke’s pursuers, the re-united friends try to figure out why someone wants to possess Luke so badly. Do the answers they seek lie within the Gypsy council, who have unexpectedly called a clan gathering for Christmas Eve?Facing terrifying Gypsy armies, and battles against ‘old magic’, can Clara and Luke outsmart the enemy and realise their destiny to save the Gypsy race?In this fourth book of the ‘Full Moon’ series, Clara and Luke must find the courage to confront overwhelming odds. If you enjoy Neil Gaiman or Rick Riordan fantasy adventures, then you’ll love this book from Litpick Top Choice Award winning author, D.A. McGrath.
2 Votes What's this?
Gypsy Legends: The Quest for Peace (Book 4) review by Emmaline

Gypsy Legends: A Quest For Peace is about a girl named Clara and a boy called Luke. They both have special magical abilities, and Luke is a Gypsy. It is near Christmas, and Luke’s clan is on the move because the Gypsy Council has called a meeting for all the different Gypsy clans. The clan is almost there when they are ambushed and the Gypsy Council members taken hostage. Luke runs away, because someone is trying to kidnap him too. Clara, unaware of this danger that has befallen her friend, finds him in the woods behind her house in bad shape.