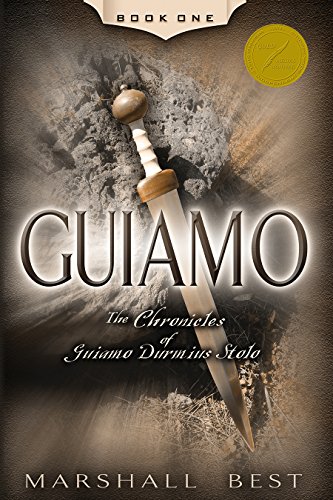 Guiamo (Chronicles of Guiamo Durmius Stolo) Book 1
Marshall Best
In 60 B.C., ten-year-old Guiamo Durmius Stolo, an exceptionally gifted Roman orphan, is abandoned in Gaul . Left to fend for himself, Guiamo is set onto a path of legend. Recognized by the gods as having world-changing talents, he is given a weapon that changes his destiny and the world’s forever.Combining legitimate legends with actual historical events, Marshall Best weaves an epic story that portrays the ancient world as it might have been, a world which the ancient historians recorded as fact; a time when gods ruled the earth and strange creatures dominated the land. It is the era of civilized conquerors exploring distant and primitive new lands. Scant recordings left to us today only touch on the fringe of the fantastic and brutal reality that existed in those distant lands of the west. Into this age, young Guiamo enters the world stage as the great game-changer, and by his hand the gods and beasts become destined to disappear into myth and legend.
3 Votes

Guiamo Durmius Stolo is an orphan whose uncle and aunt abandon him because of lack of money and food. A man named Calidius finds and raises him, and teaches him how to fish. Calidius soon learns of Guiamo's intelligence and creativity after Guiamo builds a trap for fish. Calidius sends Guiamo to his friend, Gabinius, to teach Guiamo furthermore. Gabinius teaches Guiamo hunting, letters, numbers, etc. Gabinius learns of a prophecy that connects with Guiamo and finds out that Guiamo is the son of Mars. He acquires Mars' original spear, Lúin.

Ten-year-old Guiamo, recently orphaned and abandoned by his impoverished uncle, approaches an elderly fisherman, Calidius, in hopes of obtaining food and shelter. When the weathered seaman takes the boy in, however, Guiamo's destiny is altered forever.

In the time of Rome, Guiamo Durmius Stolo - just another ordinary Roman boy - is abandoned by his uncle in Gaul. Now alone, Guiamo begins to wander aimlessly on the road, heading to a destination he does not know. After wandering for a while, he meets a fisherman who takes him in, teaching him the ways of fishing, and eventually recognizes the talent the boy possessed. After some time has passed, he sends Guiamo once more on the road, but this time to a friend who will teach Guimo even more than the fisherman could.