The Green Futures of Tycho 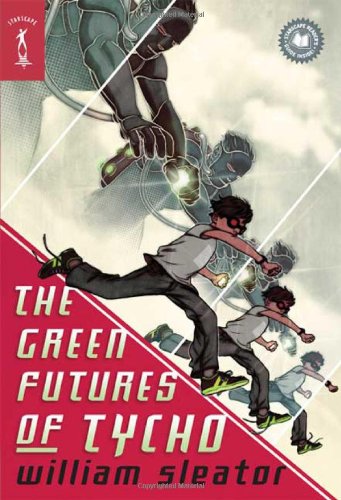 The Green Futures of Tycho
William Sleator
When eleven-year-old Tycho discovers that the mysterious egg-shaped object he dug up in his garden is a time travel device, he can’t resist using his newfound power. Soon he is jumping back and forth in time, mostly to play tricks on his bossy older brothers and sister. But every time he uses the device, he notices that things are different when he gets back—and the futures he visits are getting darker and scarier. Then Tycho comes face-to-face with the most terrible thing of all: his grown-up self. Can Tycho prevent the terrible future he sees from coming true?
1 Vote

Tweet
The Green Futures of Tycho review by MP

The Green Futures of Tycho, written by William Sleator, is a book about the adventures of an eleven year old boy, Tycho, and a mysterious egg-shaped gadget he found while digging a garden. Tycho's parents, Bobby and Judy, named each of their four children after a famous person in a particular field, hoping that there children will grow up to join that field. Tycho, 11, was named after the famous Danish astronomer, Tycho Brahe. He is expected to become an astronomer, but he has many other interests he would like to pursue as well.