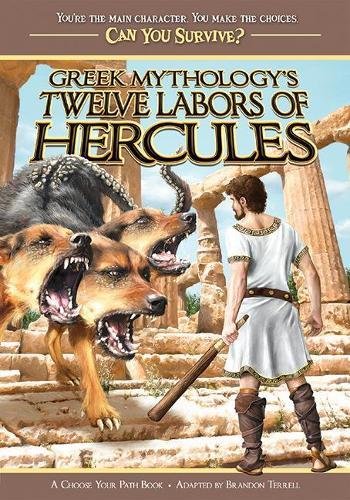 Greek Mythology's Twelve Labors of Hercules
Brandon Terrell
The goddess Hera is out to destroy you. Your only hope is to gain immortality, which can be done by completing twelve perilous labors. You are the mighty Hercules. You must use your super-strength to defeat the many-headed Hydra, to escape from an angry giant, and to complete ten other amazing feats. Do you have the power and the cunning to succeed, or will your battles with mythical creatures lead to your doom? Step into this adventure, and choose your path. But choose wisely, or else...
1 Vote

Greek Mythology's Twelve Labors Of Hercules is a story that starts about the reader and how a bully wants to beat them up after school but sadly does not have the bravery for confrontation. From a glowing book that the reader finds, it goes on to tell about a man named Hercules, son of the King God Zeus, who has been being targeted by his fathers jealous wife, the Goddess Hera, since he was born. So he goes to the oracle who tells him that he must go to his cousin, King Eurystheus.