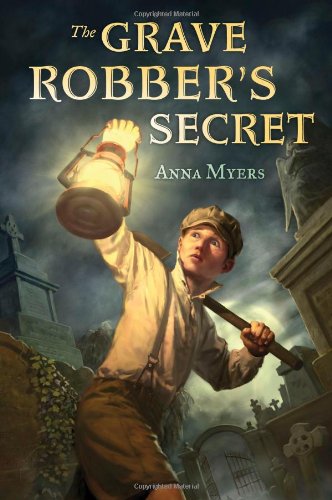 The Grave Robber's Secret
Anna Myers
The night his father forces him to help empty a grave to sell its contents to the medical college, Robby Hare swears he will never rob another grave. Yet he can't resist his fascination with the discoveries he knows the doctors will make as a result of their gruesome nighttime mission. Robby's wish for another way for his family to make ends meet is answered when William Burke and his daughter, Martha, come to live at their boarding house. Although he is grateful to avoid the graveyard, Robby senses something dangerous about Burke, and suspects him of involving his father in a broader web of evil-and possibly murder. Can Robby expose their scheme before innocent lives are lost?In an exciting journey through the back alleys and graveyards of Philadelphia in the 1800s, to the halls of the nation's first hospital and the frontiers of medical research, Anna Myers will capture readers with the darker days of history.
1 Vote

Robby Hare despises grave robbing more than anything. All he can think of is the day when he can finally escape, but sadly, he isn't brave enough to actually run away. His only enjoyment is spending time with their other boarder, a kindly Miss Stone. However, Robby knows Miss Stone won't live forever, and that makes Robby all the more depressed. Luckily for him, a wealthy man rents out two rooms in his family's boarding house, and that is seemingly the end of Robby's troubles. Unfortunately, Burke and his daughter are just the beginning of all his troubles.