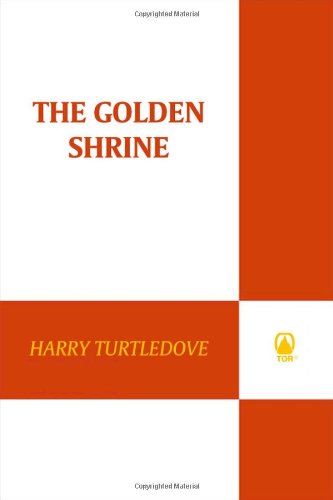 The Golden Shrine
Harry Turtledove
Continuing the alternate-Bronze-Age epic begun in Beyond the Gap:The glaciers came and covered the world with ice. Now they are in retreat. North of the city of Nidaros, north of the forest, north of the steppes where the nomadic Bizogots hunt, a gap has opened in the ice-wall. And down through that gap come the men who call themselves "Rulers."Their terrifying cavalry rides wooly mammoths. Their bows can shoot arrows farther than those of the southerners. Their wizards wield power that neither the shamans of the Bizogots nor the wizards of Raumsdalian Empire can match, a magic that can melt the stone beneath a man's feet, call down blasting fire from the sky, or decimate a tribe with plagues that have no cure. Scattered survivors of the Bizogot tribes hide from the Rulers. The Empire is shattered. The feckless Emperor Sigvat II is in hiding.Against the Rulers stands Count Hamnet Thyssen and his small band of friends.  Jarl Trasamund of the Three Tusk Bizogots. The adventurer Ulric Skakki. And, most important, Marcovefa, the female shaman of a cannibal tribe that lives atop the Glacier itself. Marcovefa has magic that the Rulers cannot counter.But there are many Rulers, and they have many wizards. Marcovefa is but one.Perhaps Hamnet and his allies can save their lands from the Rulers.  But first they must seek out the legendary Golden Shrine – and the Golden Shrine has not been seen by human eyes since the time before the glaciers came.
1 Vote

Harry Turtledove's third and final installment in the Opening of the World series is as exciting as the first two. At the start, Count Hamnet Thyssen and his friends are finally showing resistance to the conquering Rulers. With their new shaman Marcovefa seemingly unstoppable, it seems only a matter of time before the Rulers are finally pushed out of Raumsdalia. However, each small victory weakens the band of fighters, and if the Rulers aren't defeated soon, all resistance will crumble. It seems their only hope lies in finding the fabled Golden Shrine.