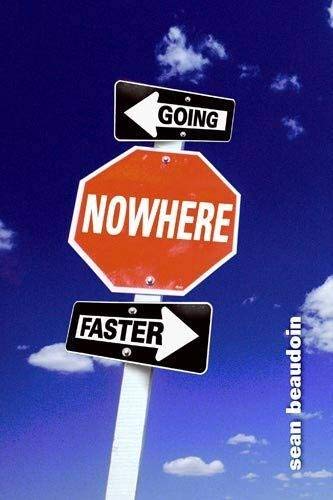 Going Nowhere Faster
Sean Beaudoin
Stan Smith has the world's dullest name, and the world's dullest life to go with it. At 17, the former junior chess champion turned "Town's Laziest Register Monkey at the Town's Only Video Store" has no car, no college, and, of course, no girl. If that weren't pathetic enough, he's got an organic-food-freak vegan mother, an eccentric inventor father, a dead-end job, a dog with a flatulence problem, and a former classmate threatening to kill him. With a 165 IQ, Stan was expected to Be Something and Go Somewhere. But when all he has is a beat-up old bike that keeps getting vandalized, he's going nowhere, faster.
1 Vote

Going Nowhere Faster stars Stan, a boy handicapped by his name and the weirdness of his family, but with an extraordinary mind. Ask Stan any math question, or anything about the video collection of Happy Video, where he works, and he'll blink, and in that time, come up with the correct answer. Still, though, Stan has a difficult time in life. He doesn't have a girlfriend. He has one friend. He hasn't even applied to college. He doesn't know where he's going with his life--or even if he'll make it through the summer, as someone is out to get Stan!