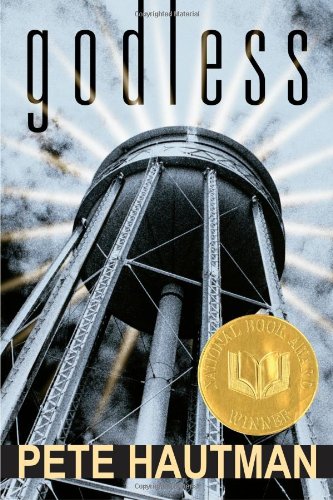 Godless
Pete Hautman
"I refuse to speak further of the Ten-legged One...but the more I think about it, the more I like it. Why mess around with Catholicism when you can have your own customized religion? All you need is a disciple or two...and a god." Fed up with his parents' boring old religion, agnostic-going-on-atheist Jason Bock invents a new god -- the town's water tower. He recruits an unlikely group of worshippers: his snail-farming best friend, Shin, cute-as-a-button (whatever that means) Magda Price, and the violent and unpredictable Henry Stagg. As their religion grows, it takes on a life of its own. While Jason struggles to keep the faith pure, Shin obsesses over writing their bible, and the explosive Henry schemes to make the new faith even more exciting -- and dangerous. When the Chutengodians hold their first ceremony high atop the dome of the water tower, things quickly go from merely dangerous to terrifying and deadly. Jason soon realizes that inventing a religion is a lot easier than controlling it, but control it he must, before his creation destroys both his friends and himself. Pete Hautman, author of Sweetblood and Mr. Was, has written a compelling novel about the power of religion on those who believe, and on those who don't.
1 Vote

Jason is tired of his parent's religion. One day he decides that just because people believe in a superior being does not mean that it can't be a material thing. With this belief Jason goes on to start his own religion...