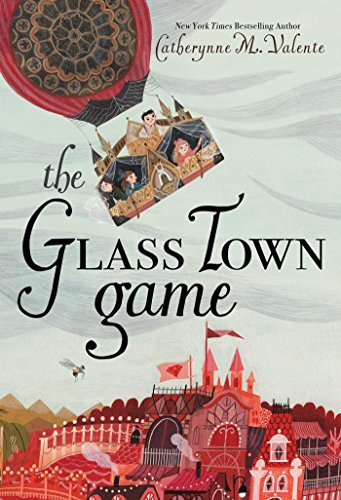 The Glass Town Game
Rebecca Green, Catherynne M. Valente
A Parents’ Choice Gold Award Winner “Dazzling.” —Publishers Weekly (starred review) Charlotte and Emily Brontë enter a fantasy world that they invented in order to rescue their siblings in this “lovely, fanciful” (Booklist, starred review) novel from the New York Times bestselling author of The Girl Who Circumnavigated Fairyland in a Ship of Her Own Making.Inside a small Yorkshire parsonage, Charlotte, Branwell, Emily, and Anne Brontë have invented a game called Glass Town, where their toy soldiers fight Napoleon and no one dies. This make-believe land helps the four escape from a harsh reality: Charlotte and Emily are being sent away to a dangerous boarding school. But then something incredible happens: a train whisks them all away to a real Glass Town, and the children trade the moors for a wonderland all their own. This is their Glass Town…almost. Their Napoleon never rode into battle on a fire-breathing porcelain rooster. And the soldiers can die; wars are fought over a potion that raises the dead, a potion Anne would very much like to bring back to England. But returning is out of the question—Charlotte will never go back to that horrible school. Together the Brontë siblings must battle their own imaginations in this magical celebration of authorship, creativity, and classic literature from award-winning author Catherynne M. Valente.
1 Vote

The Glass Town Game tells the unique story of four siblings who are magically transported to a world, not unlike their imaginary game. Anne, Emily, Branwell, and Charlotte all love to play with their toys. They do it all the time. Their toy soldiers fight valiantly against the evil Napoleon and always get up to fight another day. This game is the children’s escape. When the world isn’t right, they turn to their make-believe creation of Glass Town and the cities within it.