The Girl Who Became A Beatle 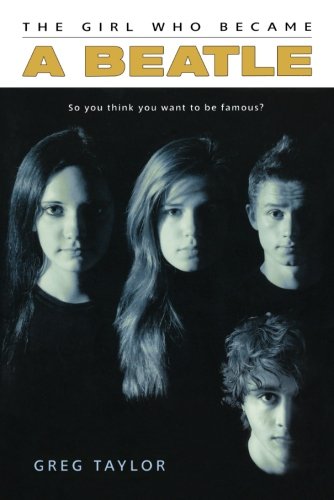 The Girl Who Became A Beatle
Greg Taylor
She loves you, yeah, yeah, yeah!When Regina Bloomsbury's band, the Caverns, breaks up, she thinks it's all over. And then she makes a wish―"I wish I could be as famous as the Beatles."The Beatles are her music idols. The next day, she gets up to find that the Caverns are not just as famous as the Beatles, they have replaced them in history! Regina is living like a rock star, and loving it. There are talk shows, music videos, and live concerts with thousands of screaming fans. And Regina is the star of it all. But fame is getting the better of Regina, and she has a decision to make. Does she want to replace the Beatles forever?Greg Taylor's The Girl Who Became a Beatle is a rocking young adult novel about the good and the bad of Hollywood, fame, and rock 'n roll.
2 Votes

Tweet
The Girl Who Became A Beatle review by BFruma

Have you ever imagined becoming a legend? Everyone has a fantasy of living the life of a famous person but it seems impossible right? Well, Regina Bloomsbury thought it was impossible too, but after one of the worst days of her life, her band fell apart because of the minimal gigs they were playing, she wishes her band the Caverns were as popular as the Beatles. The next morning Regina wakes up and sees the Beatles collectables in her room were gone and were replaced with Caverns memorabilia. Suddenly her life was drastically different from what it was before.

What's this?
The Girl Who Became A Beatle review by DH1011_TucsonRP

The Girl Who Became a Beatle was written by Greg Taylor. The story revolves around a fairly average, if melodramatic teenager named Regina Bloomsbury, living in the small town of Twin Oaks where she is the lead singer of a struggling Beatles-esque style band, The Caverns. When it finally collapses in the wake of inter-band drama, she wishes it could simply have gone as well as the band hers is inspired by, The Beatles. The following day, it has. She is quickly thrown into the star life, a major shock to her old self, who retains memories of only her past life.